Sylvie is President of HomoSFèRe, an NGO which gathers lesbian, gay, bi and trans employees of the SFR group and their friends. SFR is the second biggest telecom service provider in France, and its workforce includes more than 10,000 employees. 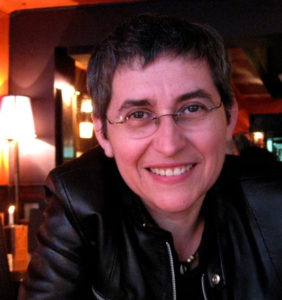 Sylvie has been working at SFR for 12 years; she was a victim of lesbophobia at work, which pushed her to change things in the company so that any employee could discuss freely about this topic and LGBT matters in general. Then, as SFR was working on its “Diversity” policy, she started thinking about creating an organization within the company; when she saw the float of Homoboulot at the Paris LGBT Pride – and in particular with signs of Mobilisnoo, the LGBT group within France Telecom Orange – she had made up her mind! With other employees of the group, Sylvie launched HomoSFèRe in October 2009 – just two years ago.

Very quickly, the Employee Resource Group gets visible by posting an article on the company-wide intranet which allows to get a snapshot of the perception of people, with some hostile reactions arguing the usual comments on splitting private/professional life or being cliquish, somewhat revealing that taboo was still very present for some employees.

Since then the NGO is regularly in contact with the executive team (although it is sometimes a challenge to be heard) in particular to set up visibility actions inside the company walls, e.g. for the international day against homophobia (IDAHO) on May 17 or for the World Aids Day on December 1st. These actions are key in developing awareness for employees and favor prevention instead of limiting the actions to punishing inappropriate actions.