by Wendy Roome, Alcatel-Lucent employee in the U.S.

This personal story is part of the National Coming Out Day campaign. 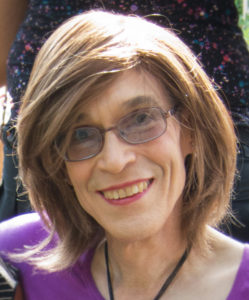 After many decades of denial and pretending to be a guy named “Bill,” in November 2012, I finally came out as transgender, and started living full-time as Wendy.

I’ve worked with a local volunteer community theater group since 1987, and I’ve been their Technical Director and primary lighting designer since 1993. This is the article I wrote for the theater’s newsletter to explain my transition.

Incidentally, everyone in the group – even the parents of the children in our children’s theater section – has been totally accepting of my transition.

Most people think that “sex” and “gender” are the same, but there is a subtle distinction. (Introductory Writing 101, Rule 6: Nail them with your first sentence!) When a baby is born, the doctor looks the kid over and answers everyone’s first question: “Is it a boy or a girl?” Yes, thanks to ultrasound, most parents already know, but it’s nice to get confirmation. That is a person’s “sex”.

On the other hand, as kids grow up, they have an innate sense of whether they’re a boy or a girl. That is a person’s “gender”.

To put it another way, “gender” is what’s between your ears. “Sex” is what’s on your birth certificate.

Most people use the terms interchangeably because for 99+% of the population, they are the same. But there is a condition called “gender dysphoria,” where “sex” and “gender” don’t match. This is also known as being “transgender” – the “T” in “LGBT”. Current medical thinking is that kids are born with this condition: the hormones that shape the fetus zigged instead of zagged.

So what happens if a kid is born with gender dysphoria? If the kid’s parents are Sonny & Cher, and if they presented the kid on national TV, the kid might have the gumption to go back on national TV and tell the world, “I’m not a girl named Chastity, I’m a boy named Chaz. The doctor got it wrong!”

But most kids don’t have that advantage. They grow up very confused. Their brains tell them one thing, but their parents and their teachers and their bodies and the world tell them just the opposite. That’s particularly true if they grew up before “LGBT” was a household word, and if they think they’re the only person in the world who has those weird thoughts.

Okay, that’s interesting, but why am I telling you this? The reason, in case you hadn’t guessed, is that I’m one of the fraction of a percent that have gender dysphoria.

Yes, you read that correctly.

Two important points before I go any further. First, this is not a joke, I’m not kidding, I’m not going pull a “Gotcha!” at the end. I’m perfectly serious.

Second, if you want to ROTFL, go right ahead. I’ll understand. I may be serious, but I don’t take myself seriously.

Ever since I was 6 or 7, I knew I wasn’t like the other boys. I wished I’d been born a girl. Of course, growing up the 1950’s, I learned very early that if I ever told anyone that, I was dead meat. So like most transgender people, I got very good at hiding it. For over half a century, the central fact of my existence was that I had to hide that secret. And for much of that time, I thought that I’d have to kill myself if anyone discovered my horrible secret.

In 1970, as I was graduating from college, I considered getting what was then called a “sex change.” I finally rejected that, for at least two reasons. One was that in the 70’s, a sex change was like going into the witness protection program without help from the US Marshals. Yes, really. You were expected to give up everything and start over from scratch. No college degree, not even a high-school diploma. The other reason was that I wasn’t interested in guys. In 1970, that disqualified me from any sex change program.

Okay, time for some definitions. “Gender identity” is whether someone identifies as male or female. I identify as female. “Sexual orientation” is whether someone prefers men or woman as sexual partners. I prefer women. The two concepts are independent. Just as some genetic women prefer women, some “transwomen” – that is, genetic males, like me, who identify as female – also prefer women. Incidentally, within the transgender community, “gay” and “straight” are ambiguous. Most transwomen who prefer men consider themselves to be straight, not gay. Why? Because they’re women who just happen to be stuck in a male body. If they were interested in women, they’d be lesbians.

And yes, that means I identify as a lesbian.

Anyway, for those reasons, as well as the social stigma and the expense and the other difficulties, in 1970 I abandoned the idea of changing my sex, and I decided to “play the hand I was dealt.” For the next 40 years, I never told another human being about my gender identity issues. I managed to come to an accommodation with my gender dysphoria, but to say that this was a barrier to my getting close to anyone rates a nomination for the understatement-of-the-year award.

Then in 2009 I had a “perfect storm” of events. Basically, something snapped inside me, and I realized that I was one tiny step away from suicide. I found a local transgender support group, and discovered that I was not alone. Yes, I knew that from the internet. But there’s a world of difference between reading anonymous posts in online forums, and actually talking to another human being face-to-face. Other gals in the group – some genetic, some transgender – taught me the basics of how to use foundation to cover my beard shadow, how to select a decent wig, how to dress appropriately, etc. I discovered, much to my surprise, that I “cleaned up” far better than I expected. I started going out “en femme”. First to private parties, in other member’s homes, and later actually out in public. I discovered, again to my surprise, that after I got over my terror, most people accepted me as a woman, or at least tolerated me.

So for a while I was living two lives. One was at work and the theater, where I was a guy named Bill. The other was with my friends in the transgender (TG) support groups, who knew me as a gal named Wendy. With them, I could relax and just “be myself” for the first time in my life. It was wonderful!

Except that I couldn’t really relax, and I couldn’t really be honest with my TG friends. I was deathly afraid that the people who knew me as “Bill” would find out about “Wendy”. So I could tell my TG friends everything about myself … except where I lived, where I worked, that I was active with a theater group, and so on. I didn’t dare invite any of them to the theater productions, least they accidentally “out” me.

So I was still hiding, no matter who I was with.

When I first joined the TG support group, several people told me I’d never get any peace until I “came out” and “went full time.” That is, admit to everyone that I’m transgender, and transition from male to female and live the rest of my life as Wendy. At first I didn’t believe them. I thought “that boat had sailed” in 1970. But slowly I came to suspect they might be right, and in May 2011 I started to see a gender therapist. After much soul-searching, in April 2012, I decided they were right, and I started to take the first steps – facial electrolysis to permanently remove my beard, and female hormones to reshape my body – and I planned to go “full time” by the end of 2012.

In November 2012, I told the theater board that I was transgender, and that I was transitioning to Wendy. After they got over their initial surprise (and I convince them this wasn’t an elaborate joke), they were amazingly accepting, particularly when I realize how many of my TG friends have been rejected by their families, their parents, their kids, their church, and even their coworkers.

So what does this mean for my friends at the theater? To start, please call me Wendy, and use she/her. Yes, you’ll probably slip and use “Bill” sometimes. I might too. Don’t worry, I won’t have a hissy fit.

Remember that I’m still the same person. As they say, “You can take the gal out of geeksville, but you can’t take geeksville out of the gal.” I’m still a computer nerd and a theater techie. Most of the time I’ll wear jeans and tops and sneakers – just like most women. But they’ll fit better and I’ll use a wider color palette. Yes, I will wear skirts & dresses occasionally – but not when I’m climbing a ladder. What kind of girl do you think I am?